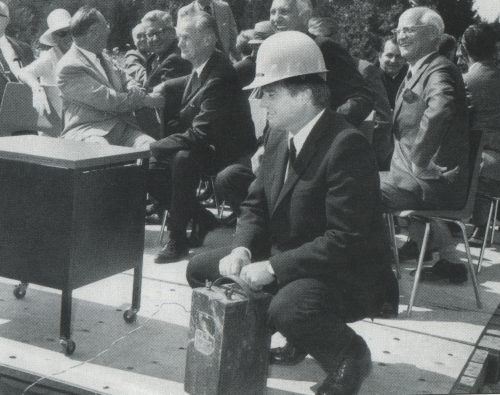 William G. Davis pushing the plunger at the sod-blasting ceremony to start the construction of the permanent building.

The day Bill Davis came to town was supposed to be “a real blast”. And it was. But only after an uncomfortable warm wait on a hot August afternoon in 1969. Loyalist had decided to begin the construction of its permanent building with a sod-blasting ceremony rather than the more sedate silver-spaded sod turning.

Ontario Minister of Education William G. Davis, guest speaker at the ceremony, was invited to push a plunger to detonate a charge of dynamite. At the appointed moment, Davis pushed. Nothing happened.

“Not to worry,” said the technicians.

College officials exchanged embarrassed smiles all around while technicians scrambled to check the connections, wires and contacts. Davis suggested that some of the audience might want to go home to get out of the heat. He wasn’t going anywhere until he finished the job!

“Let it not be said that the Department of Education is the only one who delays things through red tape,” he added.

Davis kept his humour and couldn’t resist ribbing a Ministry official on the platform beside him. How could a college of excellence fail to set off a charge of dynamite? Displaying some guarded use of language for which he would become famous, Davis quipped to the crowd, “I’ve never dynamited anything, in a liberal sense.”

As guests deciphered the wit and wisdom of the future Premier of Ontario, the technicians finally found the course of the ignition trouble: the heavy weight of dignitaries on the official platform had crushed wires between the plunger and detonator.

They fixed the problem and Davis tried again.

The crowd cheered in a shower of blasted sod and the building program was launched.