Home Doing Whatever Men Do

Join us today at 12 pm for our Discover Loyalist Developmental Services Worker program webinar. Hear from progam experts, ask questions and get ...more

Doing Whatever Men Do

“I guess the life of a girl at Loyalist isn’t too bad. I suppose it is better to be thought of as ‘one of the guys’ rather than being looked down on as being a lesser member of college society.”

The feminist tide rose at Loyalist as it did around all educational institutions over the past 25 years. But whether it engulfed the College or simply washed over it depends on your point of view.

The College began primarily as a male institution, run mostly by men to teach courses in fields which were widely regarded as male occupations. The vast majority of students were men, and the quotation above summarizes the feelings of a woman who had come to terms with being in a minority.

By contrast, in 1992 more than half of the students registered at Loyalist were women. For the first time, the balance of the sexes favours females.

The imbalance in the early years was reflected at the College in a number of ways. In 1969, for instance, the Municipal Administration program, designed to prepare students for positions in municipal assessment or treasury departments, staged a “model parliament” which was labeled “a success” – except there were no women in it. This fact was duly noted in a College news report and was not too far removed from the reality of the male-dominated Parliament of Canada.

The lack of female participation in the model parliament was excused “because there were no ‘girls’ in the program”.

Four years later, The Pioneer ran a feature on “that elite group of men who make up the administration at Loyalist”. In 1980, the newspaper ran another feature called Meet the Hierarchy of Loyalist College. All 10 photos with the article were of men.

Women were being encouraged to consider alternative fields of work. A new course began at Loyalist entitled Introduction to Non-Traditional Occupations. The course spelled out employment opportunities in trades such as welding and machine operation. A workshop on Women and Law Enforcement was held to accommodate the growing interest of women in police work. At that time, said panellists, women were still being assigned to youth bureaus rather than being given patrols.

Social change does not come quickly. Eight years later, a mothers’ and daughters’ Career Day, designed for grade nine females and their mothers, focused on non-traditional occupations for females. Among the guest speakers were a bricklayer, a funeral director, a ferryboat captain, an air force navigator and a doctor – all women.

The first equal opportunity advisor was hired at Loyalist five years after a women’s advisory committee had been appointed by the College. President Herbert Young asked for the creation of a permanent task force on the status of women at the College. The task force studied such diverse matters as daycare centres, pay equity, abortion, rape counselling, discrimination, teacher and employer attitudes and job “ghettoization”.

The creation of the position of equal opportunity advisor, as well as the introductory course to non-traditional occupations, was encouraged by new provincial affirmative action guidelines. Many of the changes were fostered by guidelines and policies developed by the provincial government.

The Board of Governors, at first heavily dominated by men, elected its first female vice-chairperson in 1980. Norma Wartman, who would later become the Board’s first female chairperson, was a teacher at Napanee Secondary School.

In the early 80s, women were “picking up the ball and running with it” in Loyalist sports, which usually featured all-male teams. Student Susan McKay of Belleville played with the Loyalist Lancers soccer team in 1981, and Regyna “Reggie” Armonas played volleyball with the College’s men’s squad. Soccer coach John Compostella said the players regarded McKay’s participation as “a turn for the better”.

During spring evenings of 1981, a 10-week Women’s Studies course explored the role of women in history and in contemporary society. Another result of the affirmative action program that year was the establishment of the Women’s Resource Centre in the College library. The Centre organized luncheon speakers and film evenings on topics of special interest to women.

By 1983, the College considered the adoption of a formal sexual harassment policy, though few incidents had been reported on campus.

The massacre of 14 female students on the campus of École Polytechnique at the University of Montreal in 1989 focused minds on improving the safety of Loyalist’s campus. President Auld established a Campus for People committee to investigate and promote safety for women on campus. The committee has three mandates: to ensure that the layout and facilities of the College minimize the risk of physical violence; to create an awareness on campus that racial tolerance, respect for the individual and offering a helping hand are the characteristics of a civilized and moral society; and to work with the Student’s Administrative Council to promote a safe and civilized campus.

The introduction of women to non-traditional jobs continues into the 1990s. Through the Women’s Access to Non-Traditional Apprenticeship Training program, 13 women were given training as machinists at Loyalist in 1991.

“I’m not a feminist,” said one student, “but I think this shows women can do the job.”

This was the message getting through.

Women studying in the Law and Security program were warned on occasion not to expect any favouritism from recruiters when they graduated. They were told that police departments, even though they were being encouraged to hire women, were still giving jobs to the best qualified candidates.

And women were selected.

One of them returned to Loyalist’s 25th Anniversary Convocation as a guest speaker.

Robin McElary-Downer, a 1981 graduate of the Law and Security Administration program, shared some thoughts with a morning Convocation audience about her job as an officer with the Ontario Provincial Police. A Staff Sergeant, she had recently been appointed Detachment Commander at Port Credit. 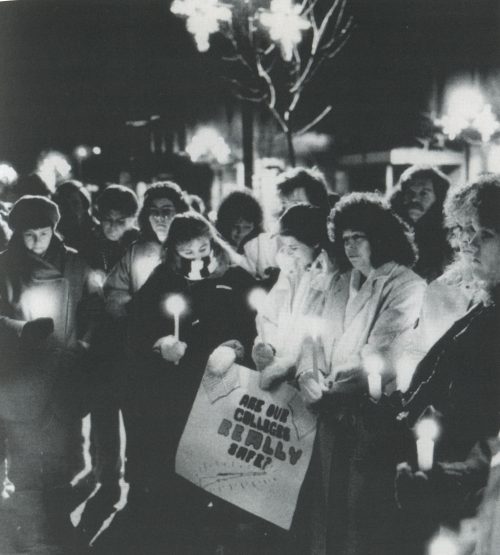