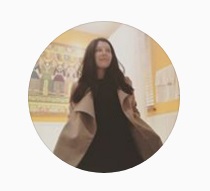 Loyalist College Journalism and Public Relations graduate Ashliegh Gehl is travelling across Canada to interview other grads about their daily lives. You can follow Ashliegh’s journey here every month or so as she publishes a new #Amazing50 blog.

Can’t wait for the stories? 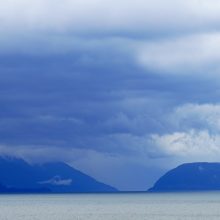 I took a bus from Victoria to Whistler. It was a lovely full-day adventure. Loyalist graduate David Pape had raved about how beautiful the ferry ride is to Horseshoe Bay. “Stay out on the deck for as long as you can,” he said. “Even when everyone has returned to their cars, don’t move. Enjoy the view.”

Those extra minutes on the deck, body pressed against the ferry’s hull, feeling the sting from the wind on my face was worth every second. A few others knew it too as we stood nearly shoulder-to-shoulder absorbing breathtaking views in various shades of blue. Only when the ferry docked did we scurry to the exit. 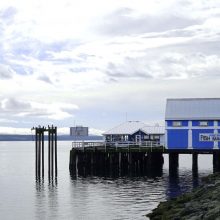 The second Victoria-based Loyalist graduate I had the pleasure of meeting was David Pape, the College’s first Student Government president. David is a 1971 graduate of the Social Service Worker program and he started PAPE Management Consulting Services Inc. Now retired, David volunteers at the Shaw Centre for the Salish Sea where he educates visitors about diverse aquatic life surrounding Vancouver Island.

It was evident from our pre-video telephone interview that David was passionate about giving back to his community, extremely energetic and had a great sense of humour. When he recommended the Shaw Centre for the Salish Sea as the location for the College’s video shoot, I immediately pulled up Google Maps and navigated it via Street View. Having never been to Sidney, where the venue is located, I wanted to get a glimpse of the spot—and it didn’t disappoint.

Only when you’re flying above the Rocky Mountains do you fully grasp their range and depth. 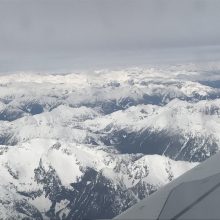 I have bussed, driven and trained through the mountains, but when I left Pearson Airport for my first-ever flight to Vancouver, I wasn’t expecting the beauty that would emerge from clear skies and foothills flowing into fierce peaks, steep valleys and crooked rivers. Nor was I expecting the serenity of an aerial view of snow-covered slopes. Just when you think you’ve spied the tallest mountain, the tallest is yet to come. 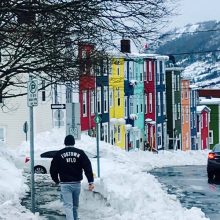 hn’s being the first stop on Loyalist College’s #Amazing50 graduate tour, those easy, breezy summer days I gleaned from commercials for the province were a far cry from the grayscale weather ‘The Rock’ endures in mid-February.

Snowbanks, some of the tallest I’ve scaled, encase the streets where those bright, beaming jellybean row houses exude warmth and reflect the positivity of Newfoundlanders.