Below is an excerpt from author Orland French’s book, PIONEERING: A History of Loyalist College (1992). To read more from Mr. French’s book, please click here.

This anecdotal and pictorial history of Loyalist College was compiled at the request of the Board of Governors in honour of the 25th anniversary of the College in 1992. 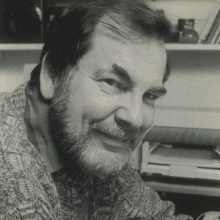 Orland French is a writer and author who teaches Journalism at Loyalist College.

Born in 1944, he was educated in Ontario and spent nearly a quarter century reporting and writing for daily newspapers, including the Kingston Whig-Standard, the Ottawa Citizen and The Globe and Mail. At the Globe, French wrote a daily column on provincial politics before becoming the newspaper’s education writer. He and his wife Sylvia, both raised in rural Ontario, left the stressful hustle of Toronto in 1991 and moved to Belleville. Here, French passes on his experience to journalism students while continuing to pursue other writing projects.

Special Thanks:
To Ron Boyce who gathered much of the information before his retirement in 1992.

Acknowledgements:
The staff of the Anderson Resource Centre, The Belleville Intelligencer, The Trentonian, the Loyalist Pioneer, the Belleville Public Library, Friends of Loyalist, former Board members and all Loyalist staff and students who contributed information and photos for this history.