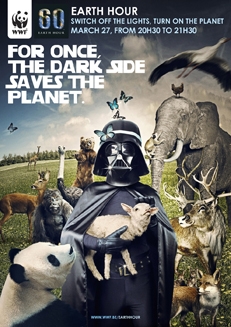 Earth Hour originated in Sydney, Australia in 2007 as a citywide energy conservation initiative. It was originally called The Big Flick and 2.2 million people participated. Because of its popularity, the movement spread nationally, and then the World Wildlife Foundation (WWF) jumped on board as the main driver of the initiative. Within one year, The Big Flick garnered widespread attention and was picked up in 35 other countries, creating Earth Hour. Last year, Earth Hour broke records as the social movement with the largest voluntary action to unite and protect the environment.

The event is held annually toward the end of March, to coincide with the equinoxes. It’s the only time of the year that sunsets are at the same time in both hemispheres. This creates a link between global communities and the heightens the realization that we’re all in this together. It has the biggest visual impact.

Major landmarks in the world such as the Sydney Opera House, Great Pyramids of Egypt, Empire State Building, the Las Vegas Strip, and even The Eiffel Tower in Paris, known to the world as the city of lights, switch off their power for the hour in recognition of their support for environmental conservation. Even Google, the most visited website in the world, switches its usual white background to black (correlating with each time zone, example www.google.mx versus www.google.ca) to show their solidarity.

Canadians have something to be proud of this year. Vancouver was crowned the winner of the Earth Hour City Challenge, beating out 66 other cities in the running for the prestigious award by the WWF. Vancouver has proven to be the most environmentally progressive city in the world. They are dedicated to sustainable, urban, environmental development. Vancouver is the world leader on climate issues and they show smart urban development despite the low number of national ambitions in regards to environmental initiatives.

Municipalities, not federal governments, drive the Earth Hour movement. This is pretty evident in Vancouver where they are streaming themselves to a 100% renewable future within a few decades. By 2020, all buildings in Vancouver will be carbon neutral. Recent development also shows that the number of “green jobs” has doubled and 50% of trips are taken by foot, bike or public transit.

Closer to home, here in Belleville, Mayor Neil Ellis and the city were invited to take part. They were encouraged to shut down the power of as much office equipment as possible at city hall. In addition, city street lights were turned off (except for a few for safety).

The stats are in from Toronto for this year, and 250 megawatts were conserved on Saturday night. That is the equivalent of 92,000 homes taken off the power grid. Leading the way, the iconic CN Tower shut off its lights too. Events that took place encouraged civilians to take Earth Hour as more than just a turn the lights off movement.

There was an eco-march that took place, bringing the participants to a final destination at a park with free concert. Each person carried a 100% green-friendly LED lamp. They could easily be used each day to substitute electric light power, and they’re much more accessible and affordable than solar panels!

Currently, where I’m living in the Gambia, we experience power outages almost every day. There are rolling blackouts. I think the longest span we’ve gone with power is 3 days. Each room in my compound has LED lights as a cost-saving and energy-saving method. If we can live each day like this, there’s no reason why the rest of the world can’t too.

Throughout the year, keep in mind these simple ways to make your home eco-friendly and pledge to become an eco-citizen.

1. Keep curtains open during the day for sunlight.

2. Take efforts to properly caulk all windows to keep in heat and save upwards of 25% annually on heating costs

3. Take advantage of energy in ‘off peak’ hours (in Ontario) from 7pm-7am week nights and all day long on weekends and national holidays.

When you’re taking part in Earth Hour again next year, and you turn off all of your lights, just remember one little helpful fact. Your candles should be either 100% beeswax or soya.  Other candles burn off C02 emissions, the number one toxin depleting the ozone layer. We don’t want to be counterproductive!

Although officially Earth Hour is only one day of the year, we must make vigilant efforts to cut back on our consumption. The way we conserve light for one hour should translate to each day cutting back on other sources of energy such as fossil fuels including oil, coal and gas. Climate change is an enormous topic. It’s present and it is real. Lots of people don’t recognize that one person, let alone 6,950 cities, can change the world’s environmental degradation. As Vancouver has showed us, depletion and global warming can be halted and reversed. It’s never too late. The movement starts at home.