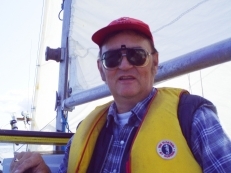 Since graduating from Loyalist College in the Electronics Engineering Technician program in 1969, has followed his passion for research and exploration as an electronics and mechanical product designer. Since 1970 he has been developing research and exploration equipment in astrophysics, geophysics and oceanographic applications. Today he is recognized worldwide for the design and fabrication of Canada’s first successful fuel cell assisted sailboat, “The Sloop Jim D”. Jim was nominated by Loyalist for the 2008 Premier’s Awards program in the Technology category, and has been selected the provincial winner for the community college system.  He will receive the award in February 2009.

After graduating from Loyalist, Jim spent the next 10 years in Mississauga working in the geophysics industry before moving to Canada’s Herzberg Institute of Astrophysics. During that time he assisted in the design and construction of the high flux telescope for the Ulysses spacecraft that was launched from the space shuttle in 1990 on a trip to Jupiter and around the sun. The mission ended in March of this year, and was a successful voyage of discovery. He also recommended and then assisted in the construction of the first three-component magnetometers for the Black Brant sounding rockets used to study the Aurora Borealis.

Now living in Victoria, B.C., Jim operates a company called AGO Environmental Electronics. He spends much of his leisure time as an inventor and recreational sailor. While sailing his 42-foot ketch he decided that there had to be a better way to power a boat than with diesel, to eliminate the smoke, smell and noise. He wondered if a fuel cell that he recalled seeing on the Apollo spacecraft might be the answer. He teamed up with a friend who works at the University of Victoria fuel cell laboratory and the two developed a two horsepower outboard. The fuel cell, a high powered solar panel powered by hydrogen, charges the battery power box that in turn runs the motor. This year he developed a conversion kit to easily change gas outboards to electric 230 VAC 3 phase using standard off-the-shelf components. This system was installed on an 18-foot cabin cruiser that has operated in Victoria Harbour through the summer of 2008, powered by batteries charged by the solar panels. This month he will receive the “Best Innovation Award” from the Esquimalt Chamber of Commerce at its Annual General Meeting.

“Jim Harrington’s career achievements are outstanding,” said Loyalist President Maureen Piercy. “It is gratifying that he credits the advanced math, physics and electronics that he learned at Loyalist as important building blocks to help him begin to see possibilities. Certainly those possibilities are endless, and Jim has proven that with his inventions and ongoing research and development. He is a worthy recipient of the Premier’s Award, and the College is extremely proud of his accomplishments.”

For his part, Jim says that he is honoured with the announcement of this award. “I really am surprised and honoured,” he said. “It is not something that you ever expect, but I appreciate this recognition very much.”

The Premier’s Awards are presented by the Premier of Ontario or the Minister of Training, Colleges and Universities at a special event held in conjunction with the Annual Meeting of Colleges Ontario in February 2009.