In Appreciation to Loyalist Photojournalism Students

A presentation was made at the College’s May board meeting by Jon Begg, Public Affairs Production Specialist at Kingston General Hospital. In 2005, 43 Loyalist photojournalism students were allowed access to KGH for a 48 hour period of time, during which 10,000 photos were taken. The hospital selected 200 of the photographs and added a sound track — the purpose was to share it with the hospital staff as a way of instilling pride in what they and their co-workers do. The project was an overwhelming success. Jon Begg presented an inscribed plaque with a collage of some of the images captured during those 48 hours. 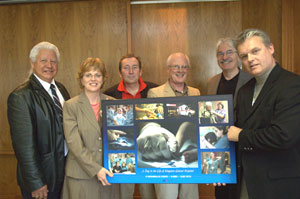