What You Need to Know Before Accessing Campus as of November 1, 2021 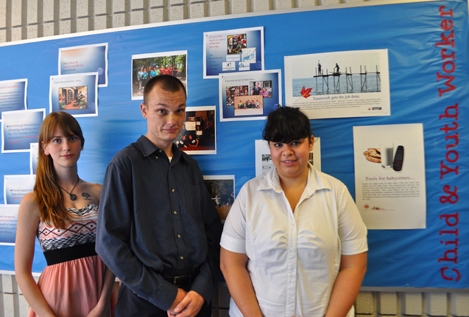 Conference attendees came from all corners of the globe to share experiences and passion for the field of Child and Youth Work.  In Kayla’s words, “It was surreal to sit in a room full of people who cared about the same things we do.”  The trio met and connected with Child and Youth Care professionals from all over the globe, including North America, Europe and South Africa. To add to the excitement, this was the first time that Katelyn and Kayla had been on an airplane and the first time any of them had visited Newfoundland.  Mitch, Kayla and Katelyn were taken with Newfoundland, describing the friendliness of the people, breathtaking scenery and whale watching.  “It was a paradise,” said Mitch.

The countryside was not the only amazing element in Newfoundland.  All three students described the conference with passion and excitement.  They were particularly impressed with the workshops they attended, which used hands-on experiences to support the growth of young people.  Whether encouraging children and youth to express themselves through drama, storytelling, music or photography, the ideas shared inspired all three students to use creative supports in their work as Child and Youth Counsellors.

One thing that is certain is that Mitch, Kayla and Katelyn are representative of the future of the Child and Youth Worker field. In one workshop, attendees were challenged to photograph something that spoke to them and describe the picture with a caption.  All three agreed that Kayla’s picture of a handprint accompanied by the caption “Leave a Mark” described their goal to leave a positive mark on our world and support children and youth to live their best lives.