Five teams of high school students pitched advertising campaigns they developed to a panel of advertising professionals and faculty at the second annual Loyalist College AdSTARS Competition.  A total of 15 teams entered the competition. The finalists included three teams from Prince Edward Collegiate Institute (PECI) and one from each of Centennial Secondary School and Fenelon Falls. The winners of this year’s AdSTARS Competition were Eric Gladu, Melanie Tugwood, Andrea Heuving, Graydon VanDyke and Alex Tait from PECI. Each member of the winning team received $1,000 toward tuition at Loyalist College and $300 from QuintEssential Credit Union. The second place team members were Jillian Dyke, Calvin Jikeli, Joel Owens, Mike Sokolowsky and Kane Rutgers from PECI. Each of these team members received $100 from QuintEssential Credit Union. 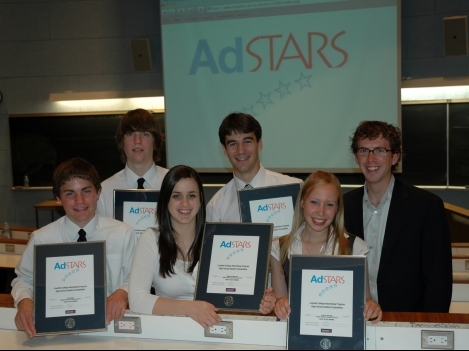