We can all take a stand to call out gender bias and create a world of togetherness. Celebrate #InternationalWomensDay and join #GenerationEquality! 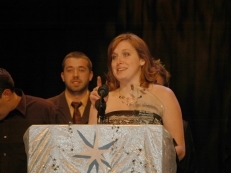 The Television and New Media Production students at Loyalist College impressed a theatre full of family, friends and industry professionals with their creative and exemplary technical skills at the fourth annual Sparkie Awards. Their major productions, documentaries, segments and commercials came to life on the big screen at the Empire Theatre and the best of the best were selected to receive a much-coveted Sparkie Award.

Third-year student Melissa Kurtin, writer, director and producer of Bake Sale, was the winner of the Best Major Production award. “The night of the awards I forgot all about the problems, headaches and sleepless nights — receiving this award was definitely the icing on the cake. I believe that the experience that I gained this year was so valuable. What other twenty-year-old can say that they have written, produced and directed their own short movie?”

“I initially chose the Television and New Media Production program at Loyalist because it was one-of-a-kind, offering three years of study and two internships that could be done anywhere in the world,” said third-year student Carin Havekes.  She was presented Sparkie awards for Best Third Year Commercial – Public Service Announcement and Best Overall Third Year Student and was involved with the Best On-Campus Episode as Technical Director and was Technical Director for the Santa Claus Parade which won Best Remote. “When I received these awards I couldn’t help but look back at the past three years that I have been at Loyalist — remembering where I had started and how far I have come. The professors have not only taught me the skills necessary to succeed in the industry — they have helped shape the person I have become and introduced me to some of the most amazing people. If I could, I would come back and do it all over again! I am going to be sad to leave Loyalist this year, but at the same time I have never been happier.”

This September the College is adding another powerful program to its Media line-up — Broadcast Engineering Technology. They have received accreditation from the U.S. Society of Broadcast Engineers Inc. for a new three-year program. There is only one other college in Canada with this accreditation. Graduates of this advanced diploma program with a B average or higher will be certified with the Society, expanding their career opportunities throughout North America.

Jane Harrison, Acting Dean of Media Studies at Loyalist, explains what makes this program so appealing to industry professionals. “This is an opportunity for students to enrol in a program that has been developed specifically for engineering and the broadcast discipline. Prior to this, many employers found it necessary to hire employees with general skills, but then had to spend time and resources familiarizing them with the broadcasting field. Graduates of this program will enter the industry prepared to make valuable contributions from day one.”