Home Campus News Greetings From an Internet Café in Paris

Greetings From an Internet Café in Paris

Just a few weeks ago Alexandra Prewer, a Loyalist College Culinary student, was excited and nervous as she prepared to join a group of 21 others from the college on a trip to Paris. This was Alexandra’s first plane trip. Two faculty members, 13 Culinary students and seven students from the Esthetician program were heading to France during college reading week — a destination that they hoped would give them exposure to world-class cuisine and stimulate their excitement and awareness of the possibilities that lie ahead. Throughout the week Alexandra sent us messages from an internet café in Paris.

Day One: I am in the most beautiful place in the world. A short walk and the best panini sandwich I have ever tasted had me convinced that all that I wanted to do was relax. Chef John our professor had other ideas — just a little walk to the Eiffel Tower. My first glimpse of it was through a myriad of buildings and all I could think was ‘this must be a dream — I’m in Paris.’

Day Two:  Took the metro to Montmartre and saw the Basilique du Sacré-Coeur, a beautiful Catholic church. Once inside, I don’t think I spoke a single word — there was so much to absorb. Afterwards, we slowly made our way down the hill of Montmartre. The streets twist and turn so that just when you think you’re seeing the most beautiful view possible, you turn a corner and something new takes your breath away. At the Gallery Lafayette I tasted the best hot chocolate ever. It was brought to me as a cup with two little jugs — one containing hot milk, the other melted chocolate. I mixed them together. I was officially in heaven.

Day Three: We made our way up to the Champs-Elysées to the Arc de Triomphe. What a view. The streets all come together like the spokes of a wheel. Next we explored Napolean’s tomb. That night we went for a dinner cruise on the Seinne River — what an elegant affair. I savoured foie gras with a fig relish, Guinea Fowl, in the most delicious sauce I could ever have imagined, served with mashed potatoes and vegetables and a dessert of poached pears. It was divine.

Day Four:  I have been within the walls of the Palace of Versailles. If the walls could talk — and I understood French better — what stories they would tell of the times of King Louis XIV. Our afternoon was spent at the Musee de O’rsay — Degas, van Gogh —all that walking and thinking was exhausting.

Day Five:  This was the day that I had been looking forward to for months — an entire day at the Louvre. Mona Lisa, Venus de Milo, Madonna of the Rocks (my favourite Da Vinci), a mummy, a mummified crocodile and so many other treasures — this will always remain one of the greatest days of my life. Dinner was at a little restaurant called Tribeca, known for the best pasta and pizza that Paris has to offer. I had a pizza of gorgonzola cheese and pear pasta with a cream sauce….so-o-o good. It is a whirlwind of adventure here and I have barely had time to catch my breath.

Day Six: This morning I went to the Church of Saint-Sulpice. Those who have seen The Da Vinci Code will recognize this church as one where some of the filming was done. The frescos on the walls and ceilings and the beautiful carvings were unforgettable. Later that day I called home. I was so glad to hear their voices. This was the longest that I have ever been away without talking to them. I have done so much in such a short length of time that I think it is just starting to sink in. It’s hard to believe that it is time to be returning home. This truly has been the experience of a lifetime. 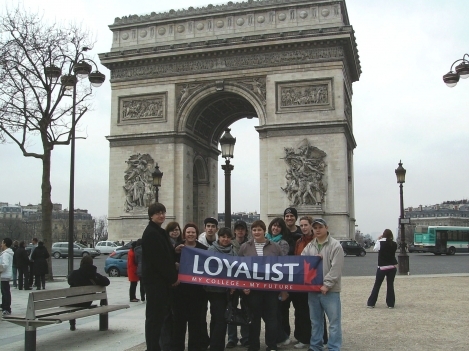