How are we doing? We want to know! The Student Experience Survey is open until March 4. As a Loyalist College student, your insight is extremely ...more 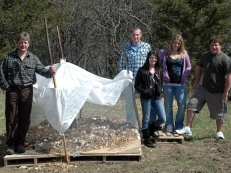 The Loyalist College Pilot Compost Program began as a class project for a small group of Environmental students. It grew into an initiative that gained support and commitment across the college campus. The students watched as the cafeteria staff, Culinary students and children in the daycare centre embraced the concept. They realized that their composting initiative was not only worthy — it was workable.

Team member Brad Purchase described the initial steps taken to get the project underway. “In the winter semester of 2009 a waste assessment of the college campus was conducted and we learned that 34.8% of the generated waste was compostable material. Further investigation showed that by using a simple backyard composter — the aerated static pile method — Loyalist would be able to decrease the amount of waste being diverted to landfills by a third.”

They approached the cafeteria, Culinary and daycare areas and explained the process, the benefits, and the necessary steps these areas would need to take for the project to succeed. They reception was positive. The composting collection bins were put in place and the composter was built. For one month the environmental students collected and weighed the compost material daily to determine the effectiveness of the pilot program.

“The program showed great potential within a very short length of time,” said student Jordan Wright. “Our initial goal was to get the composting program in operation. It became more exciting as we watched it gain momentum and succeed. The merit of the program was evident and we sincerely hope that future students will become involved and work to minimize the college’s eco footprint.”

Dayna Jensen, also a member of the team, feels that everyone involved benefited from the project. “I feel that the biggest things that I learned were how easy and convenient it is to set up a composter — and how many options you have to suit the environment you are using it in. It was important that the children in the day care centre were included. An early introduction to composting will make it a natural part of their lives. There are so many things that I want to do when I graduate and I feel that the things I am learning in the Environmental program will not only help me, but also help me to help others as I lead by example.”

The team recommends that the project be continued and expand into other areas of the college. They suggest that the nutrient-rich product resulting from the composting be used for horticultural or agricultural purposes by the college or other locations. The environmental students took simple steps which led to substantial results, setting a valuable example for the college community.

To learn about Environmental and Bioscience studies at Loyalist visit loyalistcollege.com.