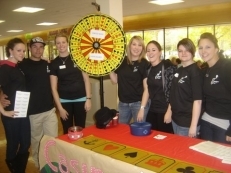 Participants let the chips fall and the cash flow at the Casino Loyale United Way fundraiser held at Loyalist College on October 15th.  Public Relations students were responsible for running the various games and attracting participants to each activity. Games ranged from Plinko and Black Jack to Crown and Anchor, and were spread throughout the college.

“Participation in this year’s event was excellent,” said Kerry Ramsay, professor and coordinator of the Post-Graduate Public Relations program. “Thirty-two PR students enthusiastically tackled the challenge of reaching their $1,500 goal – raising $1,806 in five hours. People commented that this year’s casino theme was a lot of fun. I’m sure that helped contribute to its success.”

More than 355 prizes worth hundreds of dollars were given away and many of those who donated walked away a winner. Numerous local businesses donated prizes for the event including Salon You, The Therapeutic Massage Centre, Applebee’s, Claire de Lune, HMV, Bulk Barn, Proctor and Gamble, Swiss Chalet, The Empire Theatre, the Belleville Bulls and dozens of others.

Planning for the event began in September, with students getting involved in every aspect of organizing and executing Casino Loyale. Students were challenged to apply the skills they’ve been learning to the event, such as strategic planning, fundraising, freestyle thinking, writing, event management and team building.

Cody Reed, a student in the PR program helped with a variety of tasks on event day including running the Chance wheel. Reed said participation was great at the wheel and many of those who donated won a prize. “The fundraiser was a big success not only because we surpassed our goal, but because there was a lot of support for the United Way itself among the Loyalist students and staff – and raising awareness is a big part of what it’s all about.”

Alanna McNutt, also a student in the PR program, ran the Crown and Anchor wheel in the cafeteria and said it was great to see students and staff walk away from the activities smiling. “It was such a success. Everyone participated, had fun and helped out a wonderful cause. It’s great to witness students and faculty coming together to show their support.”

The United Way event has become an annual October fundraiser for the PR students.  The theme changes every year based on the direction the students want to take. Now in its fifth year, students have raised more than $7,000 for United Way. Ramsay added that this year’s total is the largest amount ever raised by the PR students in a single event.

“United Way of Quinte would like to congratulate the students on their innovative fundraiser, Casino Loyale,” said Julia Gosson, executive director of the United Way of Quinte. “A special thanks to all the students and staff who volunteered their time and to everyone who played the games – together they made it a huge success.”