Loyalist post-graduate Public Relations students Ryan Dickison, Shonna Spicer, Danielle Bruni and Alison Kinghorn, organized a basketball tournament as a fundraiser for Big Brothers and Sisters. Tournament participants included The Spirits, The Lady Saints and Quinte Secondary School. Members of the men’s Lancers basketball team acted as refs and mentors throughout the day and lunch was provided compliments of Pizza Pizza. The players left with great prizes that included two sets of Belleville Bulls tickets from the Big Brothers and Sisters Association, a $25 gift card and NFL jersey from Metro, a $100 gift card from No Frills and T-shirts from the Lancers. Tournament proceeds will be donated to the Big Brothers and Big Sisters Association.

Public Relations student Ryan Dickison was a Big Brother in Nova Scotia. “When our group suggested the tournament as our project, I was all for it,” he said. “You can tell by the smiles on the kids’ faces that they are having fun and that was our main objective. We wanted them to be actively involved in a fitness event, learn some teamwork skills, make some friends and gain a sense of being involved in a community event. We received great support from our men’s basketball team and Manager of Athletics and Campus Recreation Jim Buck – everything came together very well. Our Lancers are role models in and out of the classroom and when they were asked to lend a hand they didn’t hesitate for a moment. Thanks to the help of many different people, the day has been a success.” 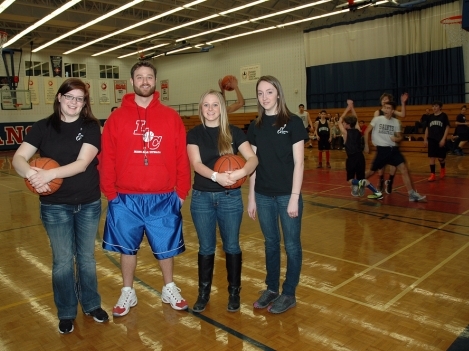