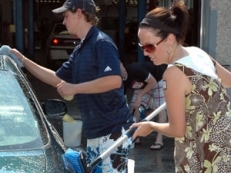 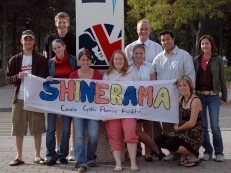 Congratulations to Loyalist College students for the successful Shinerama 2007 fundraiser on September 6th at which a total of $3,600 was raised, which included a $200 donation from the Hanley Corporation. The funds were raised for cystic fibrosis research and treatment programs. Shinerama is Canada’s largest post-secondary fundraiser which began in 1964 as a shoe-shining campaign during orientation week, and has since grown to include a wide variety of shining and non-shining activities under the Shinerama banner. A special thanks for the generous sponsorship of Flowers by Marvin, Boston Pizza, Loyalist Automotive Department, Greenley’s Bookstore, the Bayview Mall, VR Insurance, the Bohemian Penguin, A & P, the Future Shop, Bay Suburu and Scotiabank.

First prize for raising the most donations was divided between two winners with $600 going to each. The team of leader, Kelly Reeves, a second-year Business student and Residence RA, raised over $600 at the Boston Pizza location — while Curtis Wilson, second-year Business Sales student, single-handedly also beat the $600 mark. Heather Armstrong, Shinerama student coordinator worked tirelessly to promote the event. Dan Cassibo, Krista Kennelly, Roger Branscombe. Dave Templar, Camille Parent and all of the residence RAs that put teams together were instrumental in the day’s success. A big thanks to all the students who helped make this event happen.