Belleville, March 1, 2014 – Loyalist College is pleased to announce that St. Peter Catholic Secondary School of Peterborough won the title of Junior Iron Chef at the 13th Annual Competition on March 1st at the Belleville main campus. Members of the winning team include Natasha Sheward, Montana Scott, Joel Gullo and Matthew Brohm, led by their mentor Chef Catherine Rose. In second place was Prince Edward Collegiate Institute (PECI) from Picton and in third place was Loyalist Collegiate and Vocational Institute (LCVI) from Kingston. During the competition, each of the finalist teams prepared a three-course menu, which they had been practising since the preliminary competition in September. Teams were judged on the taste and presentation of food, as well as their professionalism in the kitchen.

With the help of sponsorship by Trent Valley Distributors, Ontario Pork Producers, Bib’s Meats and Nesda Technologies, members of the winning team were each awarded a $500 Loyalist bursary applicable to any Loyalist program, as well as gift certificates to be used toward kitchen equipment and supplies for their school.  In recognition of their hard work and dedication, members of the second place team each received a $300 Loyalist bursary, and members of the third place team each received a $200 bursary. The judging panel included Loyalist Chef John Schneeberger and Loyalist Culinary Management students Brennan Roy and Betty Van Wort.

“This year was really something special – we were blown away,” said Chef John Schneeberger. “Each of the teams deserves a lot of credit and a round of applause.”

“The students who competed in this competition are passionate about what they are doing, and it shows,” added Brennan Roy. “Their skill level is outstanding.”

The event took place from 10 a.m. to 2 p.m. and was organized by second-year Loyalist Culinary Management students to enable aspiring chefs to showcase their knowledge and skills in the kitchen. From inside the 6th Annual Food & Beverage Show, guests could view the competition on a large screen, streaming live footage from the kitchens. The $5 cover charge included demonstrations and samples from Club 213, the Loyalist Market, and The Spa at Loyalist, as well as restaurants and wineries from the Bay of Quinte Region.

“On behalf of the entire faculty and staff at Loyalist College, I’d like to thank everyone who participated in the Junior Iron Chef Competition,” said Vice-President Academic John McMahon. “We’re so proud to be able to host an event like this where local high school students can demonstrate their talents. To the Culinary Management program, Television and New Media Production program and all of the exhibitors who participated in the Food and Beverage Show, thank you so much for making this a fabulous annual event.” 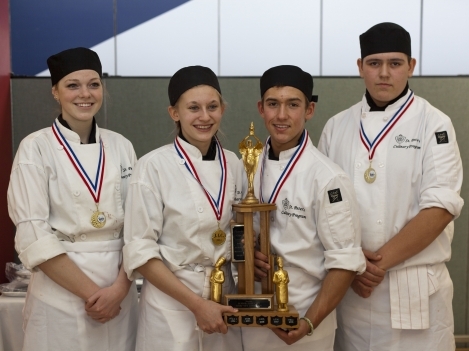