Loyalist College is proud to announce that our campus will become a regional immunization centre. Our incredible team of faculty and staff are ...more

On November 19th, 301 awards totaling $179,200 were presented to Loyalist students at the annual Undergraduate Awards Reception. Melissa Tait, second-year Photojournalism student was one of the award recipients, receiving a Canadian Millennium Scholarship Foundation – National In-Course Award and the Kingston Typographical Union Award. “It was a pretty fantastic feeling to receive two awards. The Typographical Union Award holds special meaning because the faculty chose the recipient and by being selected I feel they really like the work that I’m doing. These awards are an enormous help to me financially. Our photography equipment is very costly. Now I can get a jump start on what I will need to begin my career in only six months’ time. ” 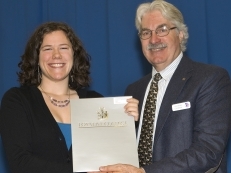