Students updated their professional wardrobes during the #WorkYourWardrobe event yesterday thanks to generous donations from the Loyalist community! ...more

Third-year students in the Television and New Media Production program at Loyalist College are in the midst of hosting open casting calls to find actors to play in their major productions. Their scripts, which they wrote in first year and developed in second year, come to life this year when they cast, film and edit their masterpieces.

Once completed, the films premiere in March at a Reel Screenings event at a local theatre. They also compete at Loyalist College’s annual spring Sparkie Awards, a celebration acknowledging student achievement in all three years of the Television and New Media Production program. 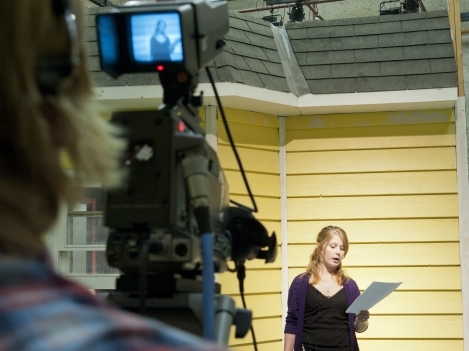 The open casting calls on Saturday, September 29th and Sunday, September 30th are a fun and exciting opportunity for aspiring actors in the Quinte region to audition for a role in one of three student-produced films. Actors will receive a DVD of their performance, as well as a web link for use in their portfolios.

As a graduate of the Television and New Media Production program, I know firsthand how important a good cast is to a production. As great as a script can sound, it’s your actors who have to sell the story – they have to bring the words off the page and make the audience believe them.

Of course, when casting a film, directors may have preconceptions of how characters should look. Very rarely will someone fit the creative concept perfectly. So, Television and New Media Production students are taught to consider each audition with an open mind and an open palette. Casting is all about seeing the characters come to life in a new light. Of course, that’s not to say students won’t find their ideal characters, but the different elements that actors and actresses bring to the table is incredible.

If you’re interested in performing, I encourage you to audition on Saturday, September 29th between 9:00 a.m. and 6:00 p.m. at the Quinte Mall in Belleville or on Sunday, September 30th between noon and 6:00 p.m. at Loyalist College in the Kente Building, Room 1N12. Being involved in a major production requires dedication and hard work, but it’s extremely rewarding.

For a synopsis of the films and the number of actors required for each production, please visit: loyalisttv.com.