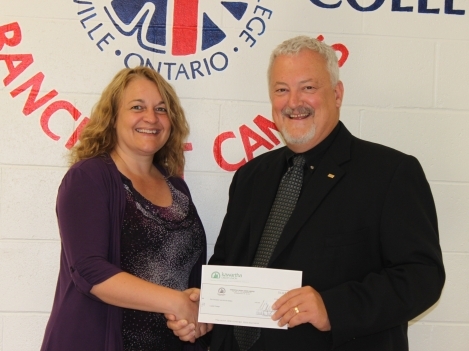 Kawartha Credit Union has been investing in students from the Bancroft campus since 2010, when the annual bursary award benefiting students was created as part of a class project for Connie Bowman, a Business Administration student.  In 2010, the Bancroft campus received a donation of $1,000, resulting in four $250 awards. In 2011, the award grew to $2,000 and was shared with eight students. In 2012, Kawartha Credit Union increased the donation to $5,000, which enabled the College to set up an endowment fund in addition to the annual bursaries.  This year, Kawartha Credit Union has donated $4,000 to the endowment fund, and another $1,000 toward the creation of two $500 Bancroft student bursaries. The purpose of Kawartha Credit Union’s Endowment Fund is to provide financial support to students registered in a program of study at the Loyalist College Bancroft campus who are enrolled in a Health Sciences program and who demonstrate financial need. This would encompass students in the Paramedic, Practical Nursing, and Personal Support Worker programs.

“As part of KCU’s Community Involvement Program, this is the largest cheque that is given out annually,” said Dean Whiteway. “We received a thank you letter from a recipient last year.  It’s great to see the end result. This bursary is a great example of community partnership in action.  We are thrilled to have the support of Kawartha Credit Union.  This $5,000 donation will help a lot of deserving students in the Bancroft area.”

Students interested in applying for one of the Kawartha Credit Union bursaries should apply through their myLoyalist portal. Bursary applications can be found in the “Awards and Bursaries” section.