For the 15th consecutive year, a gathering took place at Loyalist’s Club 213 to celebrate some of the key people who make 91X radio tick. 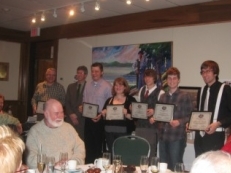 In addition to the Radio Broadcasting and Journalism- Online, Print and Broadcast students who fill many of the hours of programming, a team of volunteers from the community at large is an important part of the station’s on air line-up. These individuals create the majority of the arts programming heard on 91X, at 91.3FM and online at 91x.fm. Once a year they join faculty, staff, students and supporters for an evening of gourmet dining and socializing.

Some of the volunteer programmers at 91X have been producing programs since the station’s inception 19 years ago, while others have come on board more recently. New volunteers, and those reaching milestone anniversaries for their programs, were formally acknowledged. This year Linda Minty was recognized for ten years of producing her classical music program Musicale. Each Monday night from 10:00 to midnight Linda, who is also the principal cellist of the Quinte Symphony, treats her listeners to a two-hour session of the classics from the past 500 years, as well as more contemporary pieces.

Night Cap is 91X’s long-running jazz program and, as of last fall, the show was taken over by Frank Artés and Brian Barlow. Both gentlemen are accomplished jazz musicians in their own right and are the driving force behind the annual Prince Edward County Jazz festival. Frank and Brian were recognized as new volunteers. Night Cap is heard Tuesday nights from 10:00 until midnight and also on a one-hour Night Cap X-tra, now featured Sunday evenings at 6:00.

Two recent retirees from Loyalist College were given the Dave Sovereign Memorial Award. Both had been valued advisors and supporters of the radio station over the years. Len Arminio was a Broadcast Journalism Professor for 28 years and the 91X News Director for 18. Geoff Cudmore is the former Acting Vice-President Academic and Dean of the School of Media Studies, and also a past member of the station’s board of directors.

Outgoing members of the current board of directors, including students Eric Stacey, James Ferth, Anton Caspary, Katie Holloway, Jake Gauthier, Chris Barnim and Danny Walton, as well as faculty rep Andy Sparling, were presented with certificates of appreciation for their service to the radio station.

The night also featured a silent auction to help defray costs and serve as a fundraiser for 91X, which is a non-profit entity. The station’s management is grateful to the many area businesses and individuals who donated items for this highly successful endeavour.

As 91X looks forward to its 20th anniversary year in 2012, this annual awards dinner will likely be one of the main focuses of celebration.