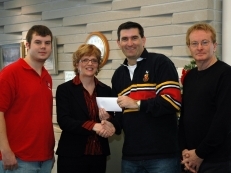 The 2009 Loyalist College United Way Campaign has set a new level of support for the community campaign.  United Way of Quinte Campaign Chair Mark Philbin, and Executive Director Julia Gosson visited the campus today to celebrate campaign receipts of $15,071.  This total includes donations from individuals and groups within the College, as well as proceeds from special events held on campus.

The campaign was launched in October with “Casino Loyale” – an event organized by the post-graduate Public Relations students at the College.  Other events included a pancake breakfast supported by Quinte Sunrise Rotary; a book sale organized through the College bookstore, and a Run for United Way organized by students in Police Foundations.

“Loyalist College is pleased to support our community United Way campaign,” said College President Maureen Piercy.  “I want to thank the many individuals who helped in this year’s success; the students, alumni, faculty and staff and our partners in the cafeteria and the bookstore, for their efforts.  I would especially like to thank the Student Government, the Alumni Association, and students in Professor Kerry Ramsay’s Public Relations class for “Casino Loyale”, and in Professor Larry Cook’s class for their “Police Run” organized in support of the United Way.” 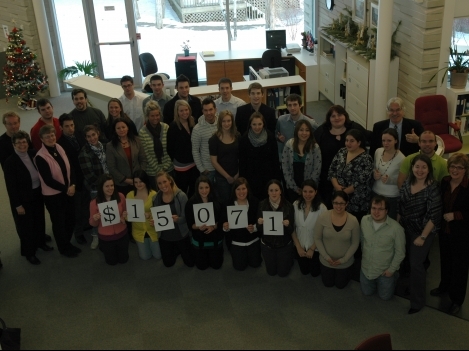