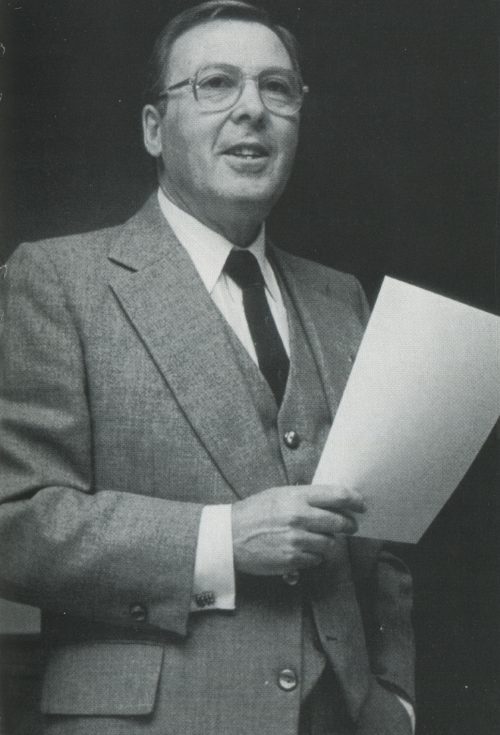 Herbert Young brought to the President’s office an impressive list of credentials as an executive officer of a number of companies. He knew his way around the executive offices of Duplate of Canada in Oshawa, The Fiberglass Company of Canada in Sarnia and Woods Gordon and Company, a large consulting company. He was also president of Dominion Forge of Windsor and Welmet Industries of Welland, a steel specialty manufacturer. Young’s role was to weld the rips and tears in the Loyalist shell and forge the College into a dynamic institution.

When he took over the President’s office in 1970, the College had 430 students – and a small faculty.

“In the early days, you’d know all the staff. We used to have our coffee breaks over in the Pioneer building and everybody would be there. Even the day I left, I knew almost everybody on staff by their first names,” he said.

The Pioneer building was the only building in use when Young arrived on campus. The technology wing in the Kente building was under construction, and all other wings were built during the next 10 years.

Loyalist College expanded dramatically during Young’s presidency, both in sheer physical size and in numbers of students. But for all of that, the biggest challenge he faced was winning the acceptance of Loyalist as a legitimate educational institution.

“When I first came to Loyalist, many people in the area neither understood nor appreciated what the College was here to do,” he said in a recent interview. “I’d have people say to me, ‘Why are you teaching a secretarial course? We’ve got a good business school right in town.’ Many people resented the fact that tax dollars were being spent on this kind of education. A lot of people didn’t understand what the College was designed to do.”

“Over time,” Young continued, “the College gradually established itself as a legitimate entity. We reached a stage where there wasn’t a family in the four counties that hadn’t been touched by Loyalist College and what it had to offer. It was a long, drawn-out process and it didn’t happen overnight.”

It was teaching process which involved speaking engagements by the President and other prominent staff members who were essentially selling the College to the community.

“I can remember giving speeches to clubs. You could see reluctance in the air. People were thinking, “Oh, here’s somebody talking about some college,” and I’d consider my speech a real accomplishment if anybody was still awake when I finished,” Young added.

“Over a period of time, we became accepted.”

During his 18 years in office, Young worked with dozens of different Board members. He says he had no trouble with any of the Boards and difficulties with only two Board members who, he recalls, “were more interested in their own image than that of the College.”