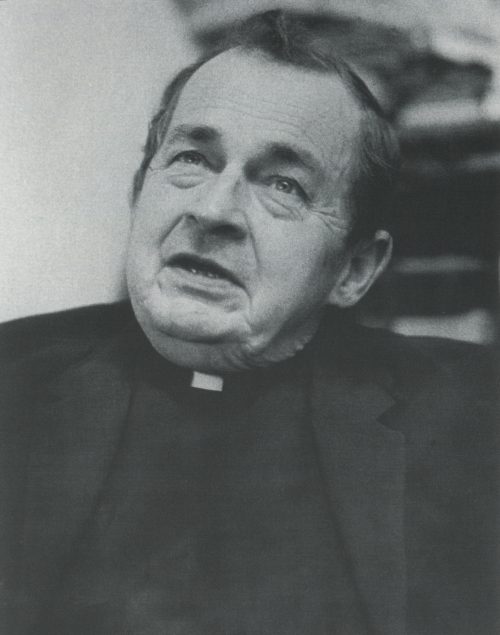 The Reverend Henry Joseph Maloney, parish priest of Bancroft, was so popular as a member of Loyalist’s Board of Governors that he wasn’t allowed to take mandatory retirement.

Maloney was chosen as the first Chairman of the Board, and thus became one of the “founding fathers”, so to speak. After serving eight years, he attempted to resign in compliance with provincial requirements, which limited service on the board to eight consecutive years.

Maloney’s sponsor, the Village of Bancroft, wouldn’t hear of it. And neither would the provincial government, which permitted him to stay on for another year. He was 60 when he retired in April 1976.

Maloney had been a busy man in Bancroft. As parish priest, he had established Our Lady of Mercy Separate School, the first separate school in the area, and had become its board chairman. He also helped found the Bancroft and District Chamber of Commerce and served as Chairman of its Industrial Committee. When there was a threat to close the local uranium mines, Maloney worked hard to save them. He seemed an ideal representative to send to the new College’s Board as a representative of the village in northern Hastings County.

“I was generally accepted as an ecumenical type of person,” Maloney said on his appointment.

At the inaugural meeting of the board, other members unanimously elected the energetic priest from Bancroft as their chairman.

Maloney was chairman of a joint board which included jurisdiction over Sir Sandford Fleming College in Peterborough. Two of the Board’s first actions were to pick names for the twin campuses. A decision was made to split the two because of the geographical distance between Peterborough and Belleville. Later, a satellite campus of Loyalist was established in Bancroft.